Writing is an Itch. This is a place to scratch. 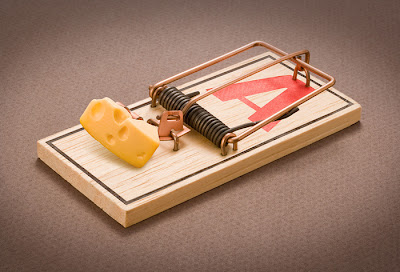 Tea Rat:  Rattus, will you looky there? Some bloody human set up a bloody trap to trick and kill one of our kind. Bloody 'ell.

Tea Rat:  I know, but this issue just makes me, well...bloody mad.

Rattus:  I know. It is tragic.  Monstrous. Traps have been used in every way imaginable to persecute all the good creatures who hail from that noble stock, rodentia. In the Middle Ages, a plague wiped out a third of Europe, and who did they blame?

Rattus:  And ever since then, it's been war on the rodents. 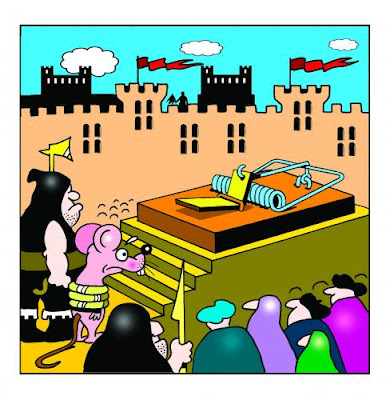 Rattus:  In more than half a millennium -- even as humans have learned to fly to the moon and communicate instantaneously around the globe, and cure polio, and plumb the ocean depths -- things have not improved one iota for us.

Rattus:  Even today, it's just more updated versions of the same old story. 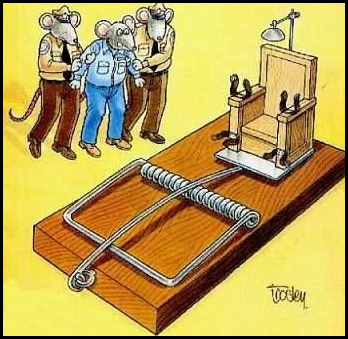 Rattus:  Then the government stepped in.

Rattus:  I mean it was bad enough when the private sector was inventing cheap consumer products to kill us. Leave it to the government to invest billions of dollars in the attempt to create the most terrifying WMD of all.

Rattus:  Exactly. And who, after all, are the humans to think themselves so above us. We know what they love the most, don't we? The fates have conspired to build a trap for them as punishment for their high crimes, right? 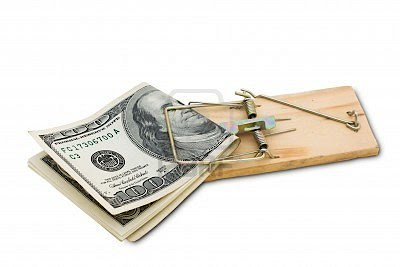 Rattus:  Yes. And even when they have no money, they invent new ways to satisfy their filthy habit. 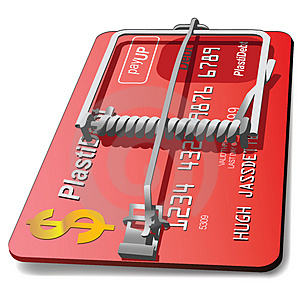 Rattus:  Mice. They are part of the rodent family.

Tea Rat:  Mouses, mice. Bloody 'ell. You mean they would try to kill Miss...Miss I can't even get myself to say it.

Rattus:  Miss Moussie. Yeah. Imagine how I feel. You know how I feel about Bebe.

Tea Rat:  That's it. I'm going to bloody well show those bloody humans what we rodents are bloody well made of. And that's the bloody truth.

Rattus:  Bloody 'ell.
Posted by Rattus Scribus at 7:29 AM 3 comments

Rattus: Good for you. The Tea Party Movement wants to return to so-called original interpretations of the Constitution, reduce government spending, the national debt, and of course taxes. I don't agree with everything they believe in. For example, an original reading of the Constitution would mean that African Americans would still be only "Three-Fifths" of a person. Nevertheless, it's good to see citizens like yourself availing themselves of the democratic process to bring about change.

Tea Rat: I don't know anything about that. I just love tea parties.
.
.
Posted by Rattus Scribus at 2:43 PM 11 comments 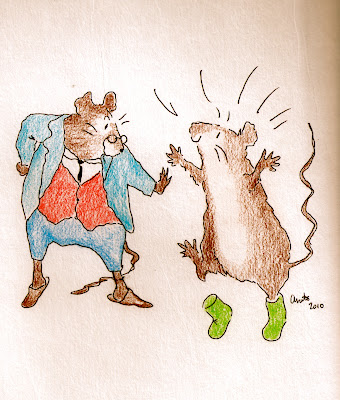 Tea Rat: I say, dear old sport / do think I fall short / if I asked the announcer / if I could announce, Sir?

Rattus: Why are you speaking in verse?

Tea Rat: I'm just warming up / chickadee, chip, chirrup / for soon and alas / a can of wup-arse / will be opened on thee / by none other than me.

Rattus: I think I'll go lie down for a minute.

Tea Rat to Announcer: I say my good lad / would it be in taste bad / if my voice were but lent / to announce this event?

Announcer: No. That's my job. Now I have to use the little boys room, so don't you touch anything while I'm gone.

Well, ladies and gentlemen, this is it. A no holds barred, wear your heart on your sleeve, warm and fuzzy, "We are the World", if  loving you is wrong I don't want to be right, It-all-ends-in-2012-Mayan Calendar Edition, RAT POETRY SLAM.

As everyone on earth remembers, of the two main contestants in the last round, Rattus Scribus, despite all his valiant verbiage, simply could not hold a candle to the word-smith wizardry of the one and only Tea Rat. Tea Rat, whose every vowel and consonant were like unto the thunderbolts of the god Zeus himself. Tea Rat, whose scintillating sibilants caused poor Rattus to fall prostrate on the ground, lying in a pool of shock and awe.....

Announcer: What do you think you're doing? You're not allowed in here. Hey you, come back here. Security! Security!

Rattus: Having a good time are we?

Rattus: What wasn't you?

Tea Rat: You too, old friend.

Announcer: ...the first of our final contestants, give it up for Tea Rat. 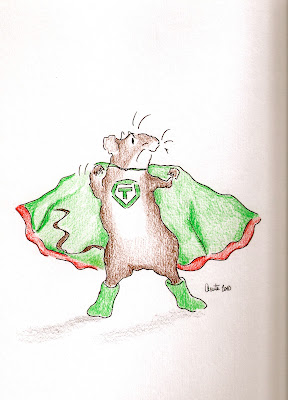 Rattus: Sniff, sniff. I don't know what to say. I'm deeply touched. Thank you. Ladies and gentlemen, For his unexpected poem of tribute to our friendship, I concede victory to my oldest and dearest friend, Tea Rat. 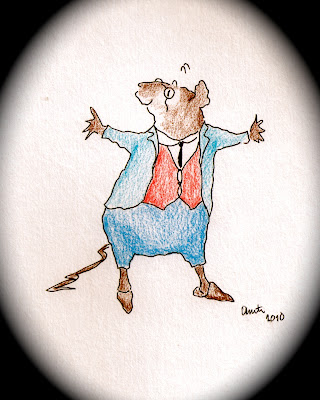 Announcer: And there you have it. The winner of the Rat Poetry Slam 2012 Mayan Calendar Apocalypse Edition is, my rat and yours, Tea Rat.
Tea Rat: Told you I'd open up a can of wup-arse on you.
Rattus: What was that?
.
Posted by Rattus Scribus at 7:13 PM 14 comments

From now until Valentines Day, readers will have the chance to vote for their favorite Valentine poem from these two crazy rats. Two poems will be posted at a time. Just say in your comment which poem you like best, Rattus' or Tea Rat's. The first two poems will be posted in a few days.
Posted by Rattus Scribus at 12:10 PM 9 comments

"POW!" Therefore I Am 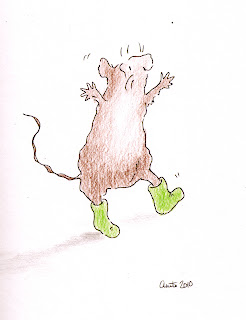 Tea Rat: Rattus, I have a question I've been meaning to ask for a long time.

Tea Rat: It is and if I can't get an answer I'm afraid of what comes next.

Rattus: You're scaring me, son. What is it?

Tea Rat: How can I know if I exist?

Rattus: The philosopher Decartes answered that question with the famous dictum cogito ergo sum, I think therefore I am. So the fact that you're asking the question proves you exist to ask it.

Tea Rat: I don't know. That sounds like a bunch of hocus pocus to me. Just because you think something doesn't mean it exists.

Rattus: No, no, you misunderstand. He didn't say that anything you can think of must exist. Just that thinking is evidence of the existence of a thinker. 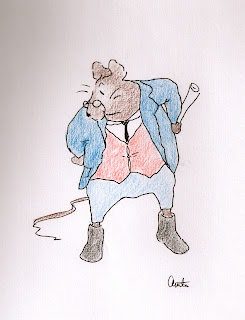 Tea Rat: Sure, sure, but there's just one part I still don't understand.

Rattus: What part is that?

Email ThisBlogThis!Share to TwitterShare to FacebookShare to Pinterest
Labels: cogito ergo sum, Descartes, I think therefore I am, Rattus and Tea, Rattus Scribus and Tea Rat

Rattus Scribus, Moderator: Candidate Big Pig, in the spirit of New Years can you tell us what resolutions you will make to the people? 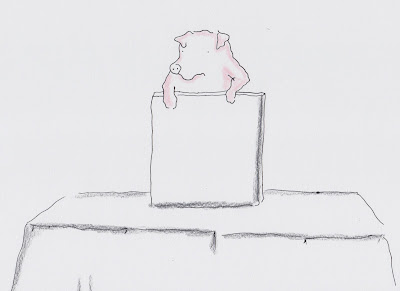 Big Pig: That's an excellent question, Rattus. You know, I was born in a humble fifteen bedroom manor in the Hamptons without so much as an indoor swimming pool, so believe you me, I grew up knowing the value of a dollar.

Rattus: But you didn't answer the question.

Big Pig: Well let me put it as straight as I can, so that I'm not misquoted by my opponents later. You, me, everyone here, and everyone within the sound of my voice. I mean we're talking everyone. That's about as plain as I can say it.

Rattus: What in the name of Tartarus are you talking about? OK, forget about New Year's resolutions. Can you give us just one good reason why we should vote for you?

Big Pig: Look, everything that's wrong today is because of that other party, which must not be named. I mean, where is the rain when you need it? And who was responsible for leaving out the cream in my coffee? I didn't flip-flop all over the place on that one. I think the people know what's really going on.

Rattus: Tea Rat, can you PLEASE tell us why you are running for office?

Tea Rat: Me? Oh, I'm not running for office. I heard something about a "Tea Party". I'm here for the Tea Party. But so far I don't see any tea. 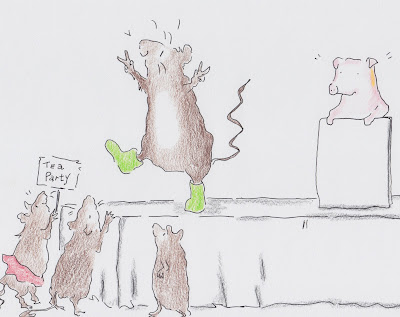 Happy New Year
From Rattus & Tea
Posted by Rattus Scribus at 10:06 AM 11 comments

Rattus Scribus
"The struggle to close the gaps between what is believed and what is done, what is and what could be, is the greatest human drama of every culture in every age. The heights of human imagination and achievement, as well as depravity, dwell in the gaps. The former escape to brighten the world. The latter remain forever imprisoned, and constantly seeks company." Ruben Rivera, Sept 2009

All The Answers Here.

This blog and all written content are the Copyright© of Ruben Rivera unless otherwise specified.

Check My Other Blog 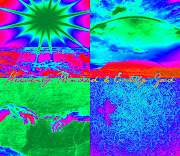